Cushy is an online multiplayer game. The goal of Cushy is to finish off your opponents fighters before they defeat yours. You accomplish this goal by using combo cards to build attacks, winning minigames to power up your attacks or bolster your defense, and mixing a myriad of buffs and debuffs to stack the odds in your favor! Once your opponent's meter is maxed out, you can finish them with a final attack! (see the "Health Bar" section below) In short, max out enemy meters and then use a second strong attack to send each one packing in turn. Last player with a fighter standing wins.

Every fighter in cushy comes from one of three archetypes! ABDL, DL, and Caretaker, this determines which combo set is used by the fighter! 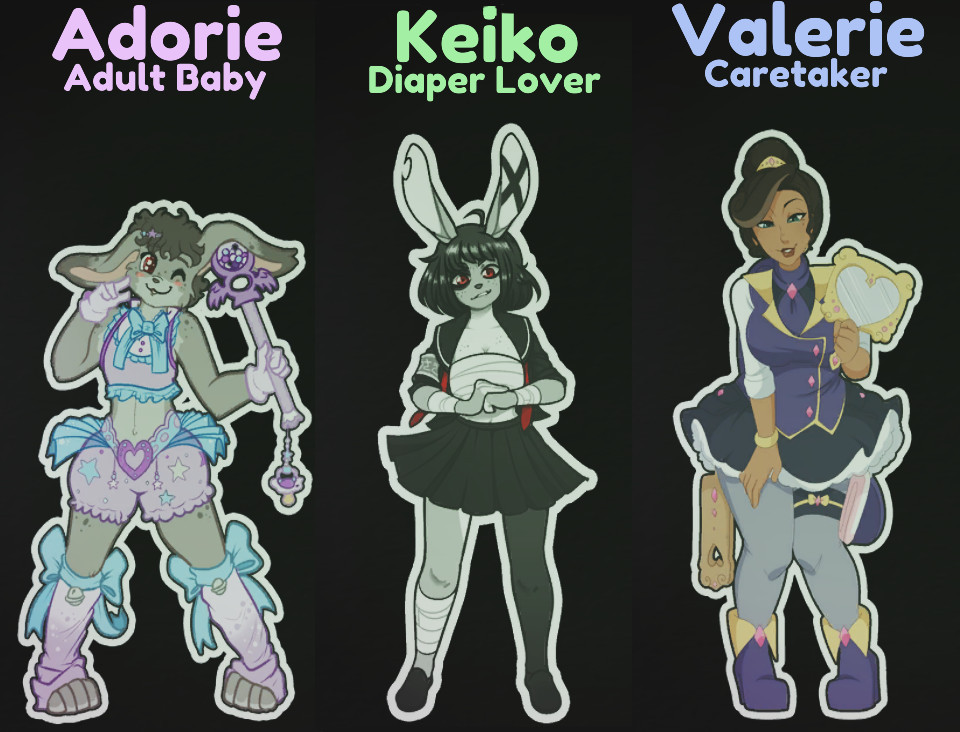 Building combos is the core of Cushy, specific combos activate special attacks. you always want to make the strongest combo you can each turn.

This combo is wedgie, wedgie, spank, and it comes from DL moveset. For combo purposes, you match the bottom-right color to the top-left color of the next card.

At any time during the game, you can click the ? ? ? circle on the left of the stage to bring up a cheat sheet for your active fighter's combos. Please note that red cards can be used anywhere in a combo, and that they will always be whatever color is needed to activate a combo (if one is possible.) 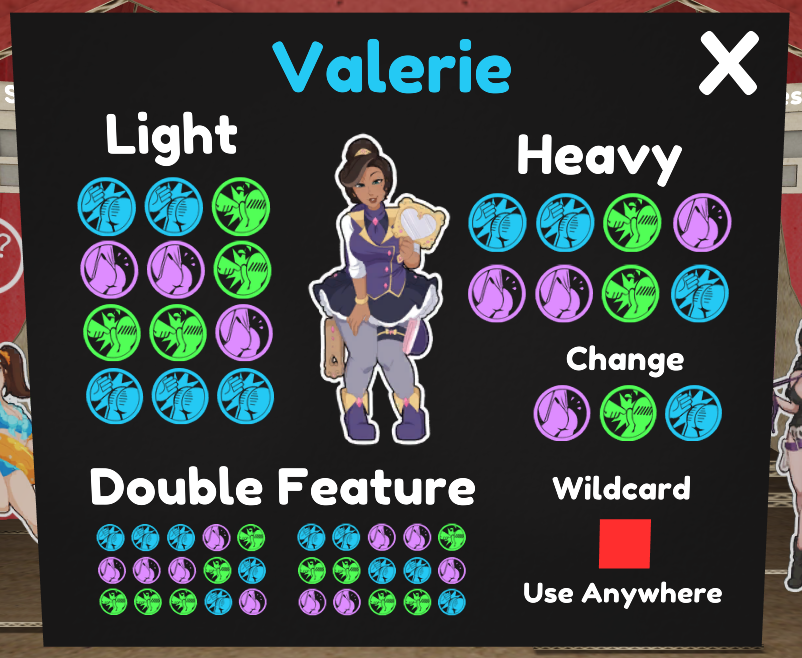 Special attacks come in two flavors, light and heavy. This is determined by how many combo cards in specific orders are required to activate them. Every special attack has a description displayed beneath it when you hover over it. The top left damage is the base damage for the attack, the top right is base healing. Bottom left shows whether the attack is targeted, and bottom right declares whether the effect of the special will have buffs or debuffs involved! Think before you attack, this is the where most of Cushy's strategy-critical information lives! 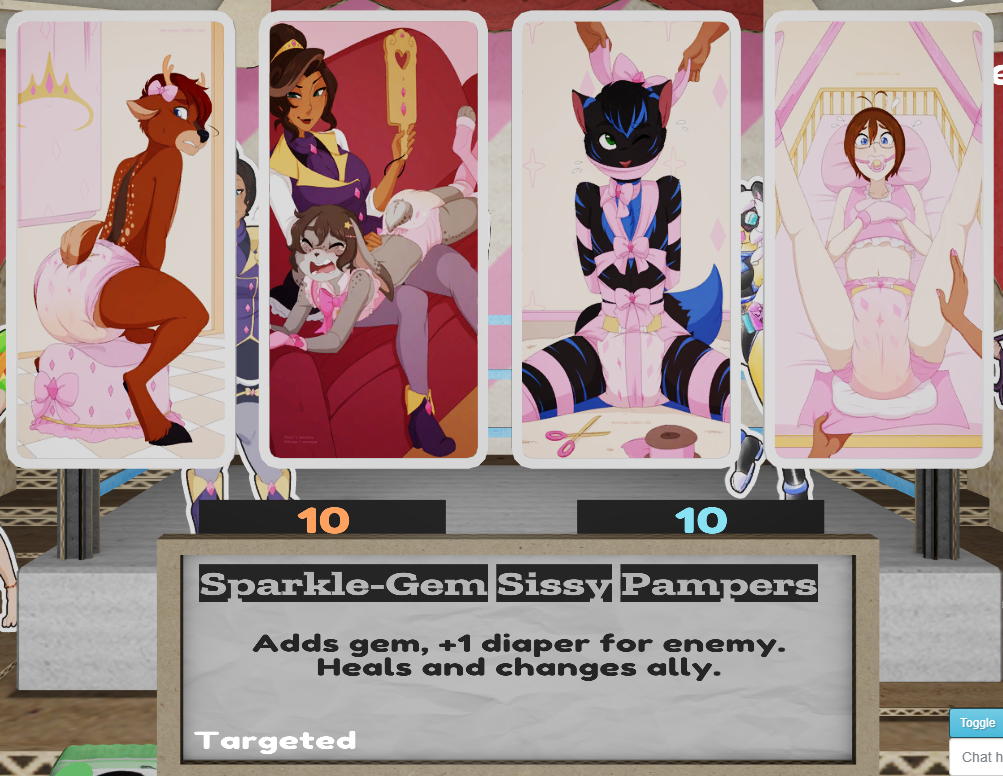 Once an attack is chosen, both players see it being performed.

Read left-to-right, these attacks are triggered by using the correct 3-card combo for your archetype! Easier to access, they often set up more powerful heavy attacks to be extra effective! 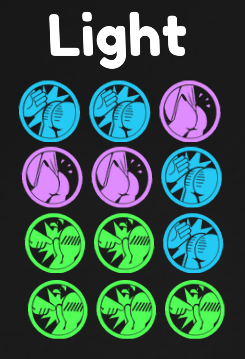 Here's an example of a special attack selected in a player's hand! (Spank, Spank, Spank) 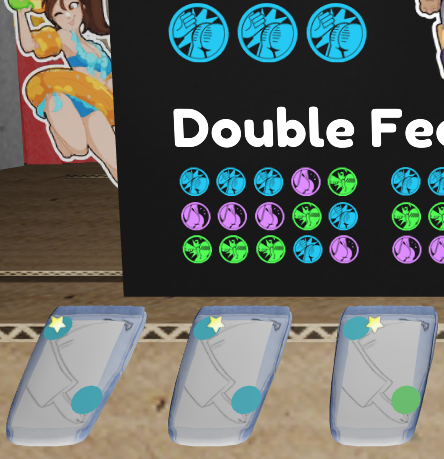 Read left-to-right, the are triggered by using the correct 4-card combo for your archetype! These attacks are generally more powerful, and frequently benefit from build up of weaker light attacks prior to launching them! 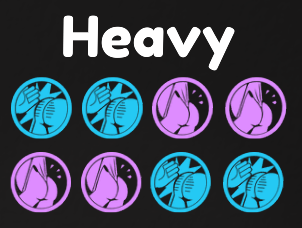 These attacks are triggering using a global set combos shared by every fighter. If your fighters haven't been finished off, you can unleash two random light attacks in a single turn! These attacks can swing even a bleak match into your favor if you get lucky!

Each player has a hand of 5 cards, and they build combos from these cards each turn. All used cards are replaced by drawing from a player's 40-card deck. Once all 40 cards have been drawn, the used cards are reshuffled to form a new deck. The deck is balanced to allow equal combo opportunity to all three archetypes. Some special attacks can adjust the max size of your hand (both up, and down!), steal cards from your opponents hand, or allow you to draw extra cards. 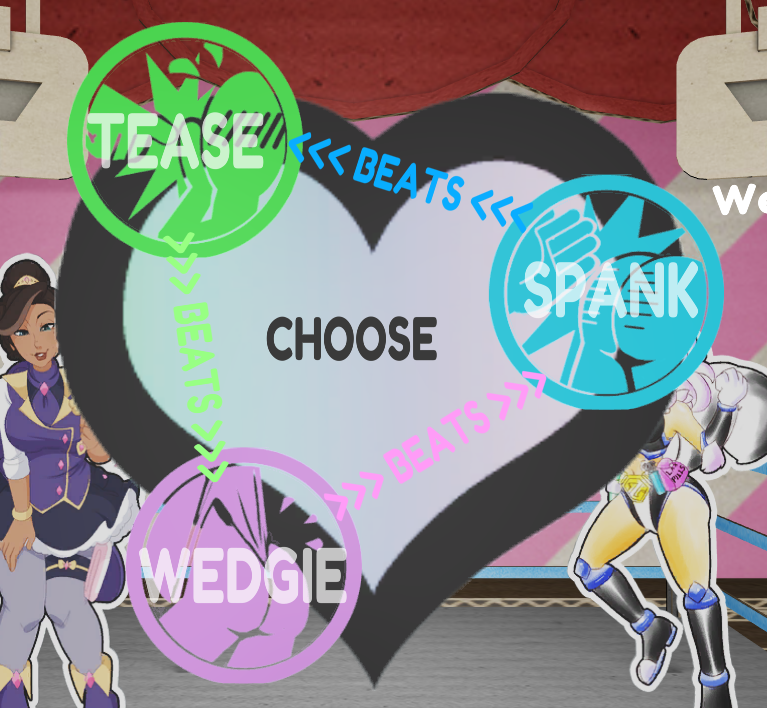 You can hold ALT to get more detailed status information active fighters. When the pink meter fills, your fighter enters a finishing-state, and only needs one more special attack to be thrown out of the game for good. If you don't quite have a special attack, a raw 4-card combo is a guaranteed finish, with the chance of success dropping by 25% for each card lost. (100/75/50/25)

Wet and Mess stacks synergize with one another, amping one another's damage as their numbers grow. Diaper stacks are used to force a victim to change multiple times before the wet and mess stacks can be removed!

These show up under your fighter's humiliation meter, and serve as a reminder for what buffs and debuffs are in effect on your current fighter. You can click on a buff/debuff icon to get some basic information about what it does.

At any time during turn you can click your allied fighter outside the ring to tag them into battle. The only things that stop this are the Prevent Tag-Out Debuff, and having a fighter's meter reach 100%.

If you go into your account settings page, you can enable "Oatmeal Mode" which censors out all messing as simple, uncolored oatmeal bumps. This feature is off by default, so you have to opt-in.

If you go into your account settings page, you can enable custom art. Once turned on, at any time during a match you can drop in an imgur album hash to stream in your customized art. If your opponent has this feature turned on too, they will see your customization as well! Here's an example album using random pictures for google image search. The image descriptions must be exact matches. Images must be PNGs with transparent backgrounds, and ideally are 1024x2048 resolution. The art will stretch to fit the canvas, but that's far from ideal. This feature is off by default, so you have to opt-in. Remember! Keep your album private! You don't have to publish it for the album to work!